skip to main | skip to sidebar

Life is funny, plain and simple. I could go on spurting cliches and idioms, but I'll refrain. Lots of changes (hence the lack of updates), and more to come. I plan on posting some small back-logged projects. Fall brought quite a bit of crafting. Actually, that's an understatement.

Back in September/October I was contacted by an old friend who had a challenge for me; take a group of children's drawings and translate them into three-dimensional stuffed "monsters." No limit on size, no suggested materials, free artistic license with details, the only rule was to try to keep the integrity of the drawing. Naturally I was a little apprehensive having never attempted such a feat, but after meeting with my client and seeing what I was working with, I was really excited. Challenge accepted. I had about two months to create four little "monsters," for four little ones. Here's what I came up with: 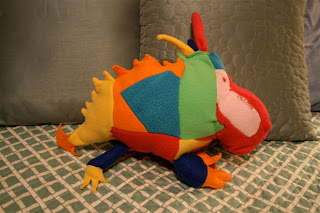 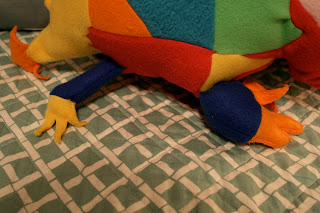 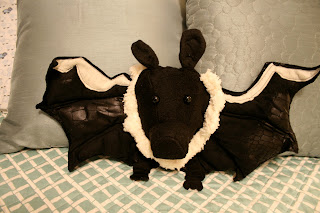 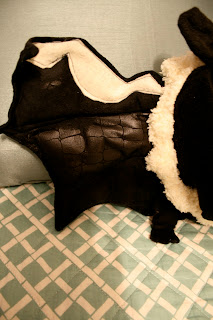 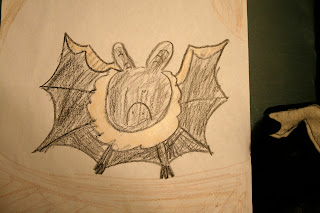 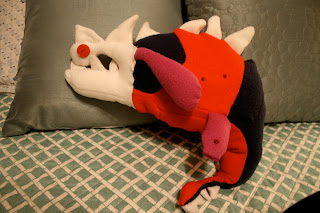 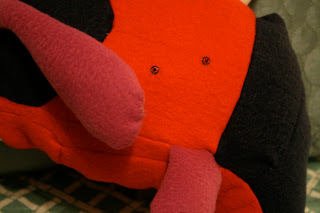 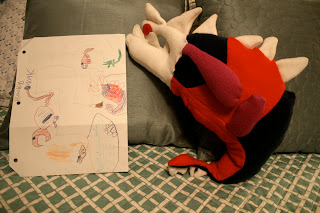 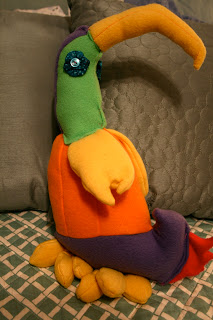 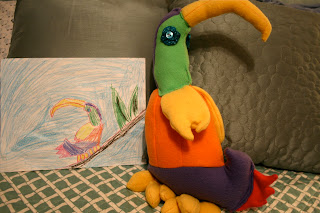 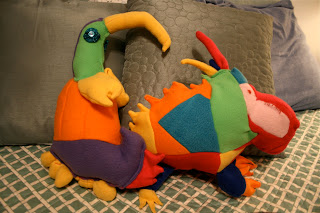 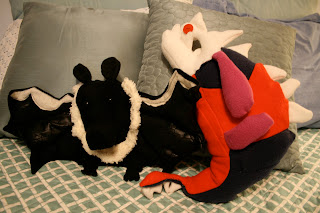 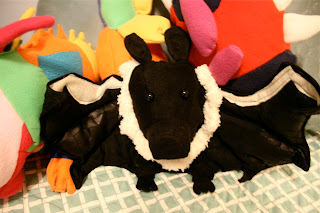 I apologize for the poor lighting and the sheep pillow case...haha. In order to get these to look as authentic as possible, I had to complete the following steps:

1. Pattern: I took a good look at the original art and hand-drew out the sewing patterns on largescale
tracing paper, making sure to leave room for a seam. I had to take into account that I needed to make separate parts for ears, feet and wings. Once drawn Each monster is around 16"-18" on the longest side.

2. Fabric/Materials: These were going to be children's gifts so I needed to make sure they were kid friendly. Save for the bat (who went to the oldest child), each monster is primarily composed of soft, non-pill fleece. It's kid friendly, it's soft, and it feels just like a normal stuffed animal would. The bat had the simplest pattern, so I decided o doctor him up with a really nice suede/faux leather for his wings. The wings are supported by pipe cleaners! I also added extra details to each monster - fabric yoyo eyes, snaps, things of that sort.

3. Cut/Sew: Pretty self explanatory really. I cut the patterns and fabric leaving a seam allowance. This way the monsters wouldn't shrink too much after sewing. I zipped them through my sewing machine, hand stitching when needed (they're rather thick), leaving room for a stuffing hole, and hand-sewed them closed.

Et voila! I'm pretty proud considering this was a first try. Until next time...

Posted by JillScarson at 1:00 PM No comments:

These days I do very little when it comes to specific pop culture pieces. It's really a bad habit (especially if I'm looking into freelancing again), but it happens. There are so many things that I enjoy that are very current but I'm hesitant to start working up pieces for them. Not really sure why, exactly. I will say this, though. Someday I will have a wall full of fabric Alfred Hitchcock movie posters (I suppose that's not current but it's extremely relevant hah).

With that said. I started this back in March before the Season 2 premier of Game of Thrones. It sat there in pieces for months. Literally almost complete, but in pieces. I keep thinking that I'm going to put something in to break up the space between the direwolf and text but it hasn't happened yet. Mountains? A patch of green meadow? I'll figure that out eventually but right now it's not really bothering me. It's stark, har har. Funny story though, just as I haven't completed the piece I still haven't gotten around to finishing the second season. I like it, but I need to be in a mood to watch. I'll take some weekend this fall and get completely immersed  again. Oh well. 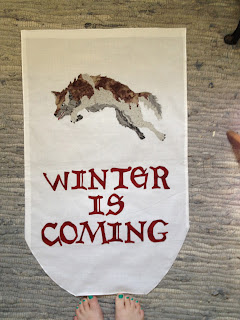 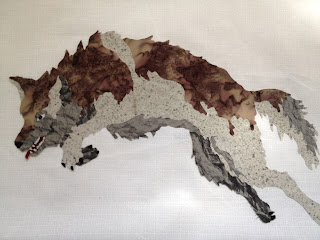 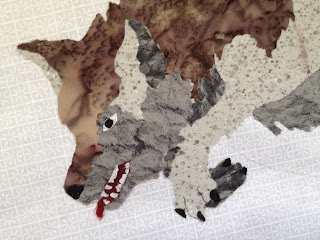 So basically I now own a sigil. One that I made. I'm hoping it's not a gateway drug to LARPing. Not that there's anything wrong with that. Haha. Hopefully more new (new) pieces soon.

J
Posted by JillScarson at 4:13 PM No comments: 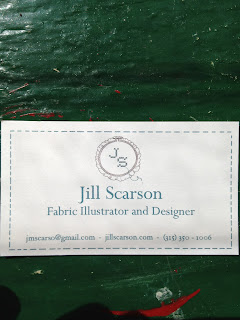 Nothing to write home about, right? I spent last night trying to come up with a new concept.  Drew some logos, scanned them in, played with my tablet and HATED everything that I was coming up with. In a desperate attempt to be productive, I took my old cards and doctored them up a bit. I think the end result is at least a little more interesting. If not interesting than at least a little more personal. 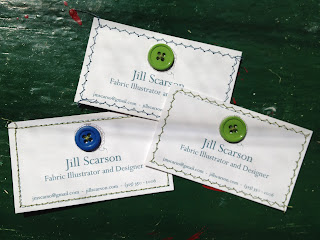 A little bit of stitching, a few bright buttons and they're a little more me. I still intend to come up with new cards (which will most likely feature the fabric peacock feathers), but these will do for now. For now I'm off to enjoy the gorgeous weather and listen to my neighbor practice (classical singing). Perhaps a wolf update soon? Maybe? It's almost done. But then again, it's been "almost done" for months. Until then,

Posted by JillScarson at 4:13 PM No comments:

It's been six months. 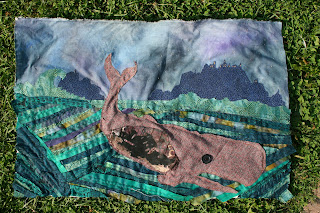 Six months of waiting and whining and putting things off. 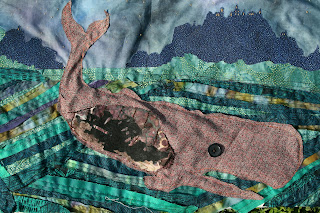 Six months of annoyances, distractions and procrastinating. And I promise I won't be gone this long again. Here's the elusive whale piece. I don't know why it took me so long to finish. It just kind of sat there, patiently waiting for the final stitches. I have more half completed projects that I'm working on. They'll be up as soon as I can get around to it.

J
Posted by JillScarson at 3:07 PM No comments: 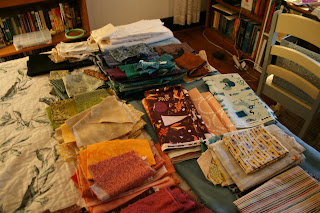 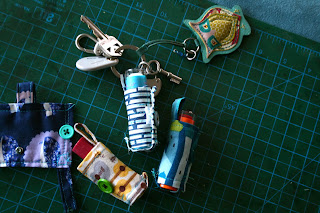 This year I promised myself that I would make more of an effort to use my Pfaff. While I'm still moderately terrified that I'm going to break the darn thing, I've found that sewing machines are pretty resilient. They don't like 30 year old thread, though. Highly advise against it. Seriously, bad idea. So ancient thread aside, I'm working on developing a relationship with my machine. Learning what it likes, what it doesn't, what it absolutely cannot do, etc. Essentially, I'm taking it slow doing little projects here and there. For my first actual, productive project I decided I'd test out these awesome chapstick cozies that I found here. They're an easy weekend project and absolutely adorable. If you do decide to test them out, I highly recommend adding a strap to the bottom. I found that without cette strap the chapstick slid out pretty easily. I also recommend snaps as opposed to velcro. 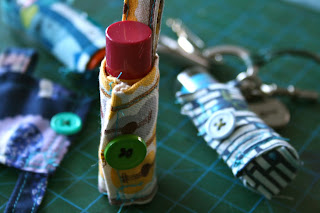 J
Posted by JillScarson at 10:37 PM No comments: 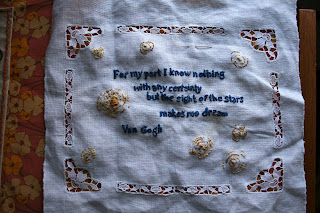 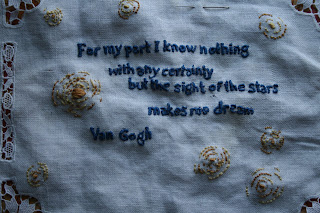 I would like to take a minute to apologize for my shotty photography. I don't typically have much time to photograph, so I'm either trying to capture early morning light (on my way out the door) or soft light at home in the evening. Both have their limitations. With that said, I think this is the last of these little stitched pieces for awhile. It's nice to come home and have something already started that I don't have to really focus on, but I have ideas for other larger projects. I've also started cutting pieces for a sample quilt, mostly to get better acquainted with my sewing machine. I figure that the more I use it, the less anxious I will be of breaking it. This is an actual, somewhat irrational fear only to be conquered by taking the time to learn.

Not much else is new. I continue to doubt that it's actually winter. It's been so mild here and GREEN. I'm not sure how I feel about it. I will say this, I'd rather it snow now than in April. We'll see what happens.

J
Posted by JillScarson at 9:47 PM No comments: 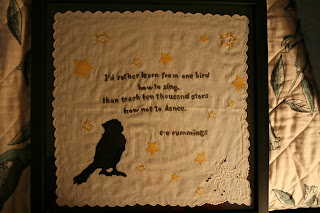 I recreated the e e cummings piece as a commission for a friend. I promise it looks better in person. Or, well it's growing on me. I have a few other things in the works so hopefully more updates soon. Until then...

JillScarson
I am an illustrator who currently resides in Syracuse, New York.